We have put the list in order to visit if you were traveling Vietnam by bus or overland. Vietnam flights are really affordable. We choose to fly within Vietnam as several of the Vietnam bus routes were overnight buses. It would take almost a whole day to get from one Vietnam destination to the next. For example, if you were to go to all the below places in Vietnam it would be 2,590 km. We purchased three one-way flights with luggage on Jetstar for under $100 per person. A Vietnam trip should start (or end) in Ho Chi Minh City, it’s the perfect place to kick off a Vietnam vacation. Ho Chi Minh City (HCMC) is formerly named and still often referred to as Saigon. 3 days in Ho Chi Minh City would give you just the right amount of time to see most of the tourist attractions nearby. Ho Chi Minh City is the largest city in Vietnam with a population of 10 million people and a staggering 4 million motorbikes. If you have ever played the video game Frogger it will come to life when trying to cross the street in Ho Chi Minh. There are tons of things to do in Ho Chi Minh city but the following tourist attractions are a must: Vietnam, Ben Thanh market, War Remnants Museum, Saigon Central Post Office,  and eat lots and lots of Pho. The best Vietnamese Pho we had was in Ho Chi Minh City, our hotel offered it every day at breakfast. You will likely begin to realize your love for Vietnamese food in Saigon, we now find ourselves craving Pho. The Cu Chi Tunnels are an easy Vietnam day trip from Ho Chi Minh City. There are tons of Vietnam tour companies selling half day and full day trips to the Ci Chi Tunnels. The tunnels were used during the Vietnam War by the Viet Cong soldiers. These underground tunnels are an extensive network of connecting tunnels where the soldiers lived, used as a supply route, etc.

You can literally crawl through the tunnels and try and imagine what life would have been like living in the tunnels during the war.  We suggest the half day trip which can be booked online here with Viator in advance for only $18. 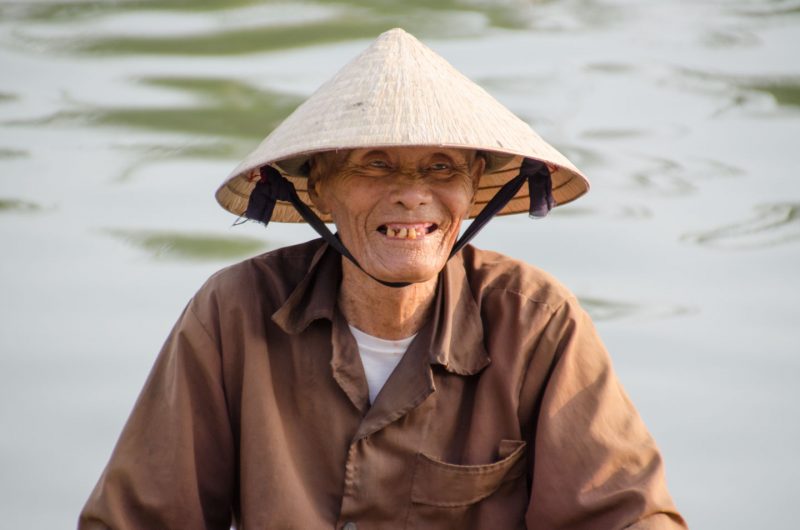 Take a river cruise down the Mekong Delta. The Mekong Delta lies just outside of Ho Chi Minh city. Overnight Mekong Delta tours can be booked online for as low as $65, there are several one-night trips and even longer ones. Mui Ne is like no other destination in Vietnam and is only a 4-hour train ride away from HCMC. Mui Ne is the driest region in Southeast Asia. There are some amazing unique things to do in Mui Ne. Head 20 miles to the white sand dunes of Mui Ne for quad biking, we’ve quad biked in Namibia sand dunes but never knew about this Vietnam attraction. Get up early in the morning for sunrise over the dunes just a mile outside the center of Mui Ne. Save time for other things to do in Mui Ne like windsurfing and kite surfing. The best time to visit Mui Ne is between the months of December through April.
The closest airport to Mui Ne is Ho Chi Minh City. Da Lat is a gorgeous little mountainous town known as “The City of Eternal Spring” with year-round cooler temperatures. It’s the perfect place to relax for a few days while visiting Vietnam. Da Lat has amazing lakes and waterfalls that are easily explored by motorbike. If you are looking to visit the “real” Vietnam head to the nearby minority villages just outside of Da Lat.

There are several daily direct flights to Da Lat (DLI). Average 2017 flight prices for a one-way ticket from the following Vietnam destinations: Nha Trang is Vietnam’s most famous beachside destination. Many tourists travel to Vietnam just to go diving in Nha Trang. It’s much busier and has an urban feel, so if you are looking for a relaxing Vietnam beach vacation head to Mui Ne or Phu Quoc instead. Besides the gorgeous beaches, there are several waterfalls near Nha Trang. Don’t miss the famous Thap Ba Hot Springs and Mud baths are only 2 miles from the city center. Nha Trang is very popular with Russian tourist and many of the hotels have Russian speaking staff and Russian menus. It may be difficult to find English speaking staff in Nha Trang.

There are several daily direct flights to Nha Trang (CXR). Average 2017 flight prices for a one-way ticket from the following Vietnam destinations: Hoi An Vietnam is our favorite Vietnam destination and a place we could easily spend a week if not a whole month. Hoi An is a gorgeous coastal known that is also a UNESCO World Heritage site.
Some of the best Vietnamese food can be found in Hoi An, along with ten cent draft beers. Our money has never gone further than in Hoi An, there are 4-star hotels for $20 a night in Hoi An. We stayed in an Airbnb apartment so that we had more space since we spent a week. If you are spending a week in any of these Vietnam destinations see what is available on Airbnb.
Hoi An food scene is also very rich. Do not miss the chance to taste the amazing Hoi An Street Foods once you are in town. If you were overwhelmed by all the motorbikes in Ho Chi Minh city then Hoi An will be a good alternative. The pace of life is so much slower in Hoi An. You can rent a motorbike and get lost in the nearby rice paddies or head to the beaches in Hoi An. Hoi An really is one of the best places to visit in Vietnam.

The closest airport to Hoi An is Da Nang. Da Nang is the gateway to several UNESCO World Heritage sites and cities like Hue and Hoi An which are nearby. Da Nang’s biggest attraction is Mỹ Sơn archaeological site dating back thousands of years ago, it’s 70km west of the city. Da Nang is a coastal Vietnam town very popular with expats.

There are several daily direct flights to Da Nang (DAD). Average 2017 flight prices for a one-way ticket from the following Vietnam destinations: Hue is known as “Vietnam’s Imperial City” and was the national capital from 1802-1945. There are several things to do in Hue but the biggest attraction in Hue is the Citadel. The citadel is surrounded by a moat and thick stone walls. Other Hue sights to see Forbidden Purple City, Thien Mu Pagoda, Hue Market, and imperial tombs.

There are several daily direct flights to Hue (HUI). Average 2017 flight prices for a one-way ticket from the following Vietnam destinations. Click here for our guide on how to get from Da Nang airport to Hue. Hanoi is Vietnam’s second largest cities and the motorbike traffic is similar to that in Ho Chi Minh City. But honestly, motorbikes and Vietnam go hand and hand. There are tons of things to do in Hanoi that you could spend a week in Hanoi. Some of Hanoi attractions are: Hỏa Lò Prison also known as Hanoi Hilton where John McCain was a prisoner of war, Ho Chi Minh museum was one of the weirdest museums in the world but worth the visit, Thang Long Water Puppet Theatre, and the favorite thing we did was go on a Hanoi street food tour. Street food tours are a great way to learn Street food tours are a great way to learn your way around Hanoi, try local food you would have never tried before, learn about the Vietnamese dishes, get Hanoi tips from your guide, and the best part was it was only $18. You can book online here in advance. After the tour, we had new friends and continued our time in Hanoi by enjoying ten cent draft beers on the streets of Hanoi.

Average 2017 flight prices for a one-way ticket from the following Vietnam destinations: Sapa Vietnam is like no other city in Vietnam. Gorgeous green ride paddies in the Vietnamese mountain town are the highlight of Sapa. Take a tour through the rice paddies and visit the local Hmong & Dao villages. One of the most unique tours in Sapa actually spends the night in the village. Sapa homestay tours will give you a real look at life in Sapa. There are several options from one night to multiple nights Sapa homestays and even tours from Hanoi to Sapa for only $100. A trip to Sapa is a trip in itself. Most tourists in Vietnam travel to Sapa by train, there is a daily overnight train from Hanoi to Sapa that takes about 8 hours. TIP: Don’t take the cheapest train, pay the few extra dollars for the more expensive tourist class sleeper. Let’s just say we saw a rat on our train when we took the wrong one. Another way to get to Saps is by shuttle bus, we would not recommend this as the roads are very windy and can be dangerous.

Closest airport to Sapa is Hanoi.

Halong Bay is a highlight on all Vietnam Holidays and a must on any trip to Vietnam. Halong Bay literally translates to “descending dragon bay” and is a UNESCO World Heritage Site. Halong Bay has more than 1,600 limestone islands. Most of the islands are unhabitable and therefore most tours to Halong Bay are boat cruises. There is a variety of classes of Halong Bay cruises and duration, we suggest at least a 3-day trip to truly take in the beauty.

The closest airport to Halong Bay is Hanoi.

Well technically you would not travel to Phú Quốc from Halong Bay, we just didn’t know where to put Phú Quốc on our list. Phú Quốc is a largest Vietnamese island and is located in the Gulf of Thailand. It is a tropical paradise with turquoise waters and sandy beaches. Phú Quốc tourism has just begun as it was a relatively unknown destination in Vietnam for many years. Tourism has been increasing over the years with the new international airport. Phú Quốc lies just south of Cambodian coast and the nearest coastal town of Ha Tien is 40km away. A bonus is that Phú Quốc visa-free for a period of up to 30 days!

There are several daily flights to Phú Quốc (PQC). Average 2017 flight prices for a one-way ticket from the following Vietnam destinations:

A Guide to Getting Married in Koh Samui

Explore the Hidden Charm of Hawaii

Sorry kids, the powers off so no ice...

Its hot, damn hot… in Hue

Driving around the north-east coast of Bali back...

Over the Hai Van Pass